1
Silk scarves. Leather helmets. The sound of the wind in the wires as you cruise over No Man's Land searching for enemy aircraft. Suddenly you see one, and put your plane into a dive from out of the sun...
Eagles in the Sky is a 2-player card-based game on plane to plane warfare during the last year and a half of the First World War. Players each command a "flight" of 1 to 6 aircraft during any of several types of missions, including Patrols, photo recon and even balloon busting.
The game includes all of the major types of aircraft active on the Western Front in that period, including the Fokker triplane, Sopwith Camel, SPAD XIII and Fokker DVII.
Eagles in the Sky may be played in one of two ways: individual engagements or campaigns, in which the players control "squadrons" and complete 5 days of missions, taking into account losses, pilot fatigue and the requirements of higher headquarters.
Each engagement is 8 turns long, and each turn except for the first begins with a random event. These can add or subtract aircraft from the engagement , cause flak fire or other effects. The players then determine who has the initiative and draw a hand of cards based on the number of scouts (fighters) in their flight and the ratings of the flight leader. They then (beginning with the player with initiative) alternate playing cards to activate their aircraft. Activations can be Targeted against another plane or ground target or Untargeted (things like clearing gun jams). When targeting another aircraft the target can play a card in response. Depending on the planes' ratings and the cards played one aircraft may gain Position over another, which allows it to attack. Attacks are resolved by drawing a card and checking the combat portion of that card to see if the attack succeeds and how much damage it does.
In a campaign each day begins with one player drawing cards to see which particular missions will occur that day. Players then resolve each mission in turn, starting by assigning aircraft and pilots to it. A given pilot can fly as many times per day as the player wishes, but each flight incurs fatigue, which will eventually exhaust that pilot.
Missions are resolved as engagements (using the base rules) or encounters, where each sides aircraft meet a non-player opposing force. At the end of each day, players reduce fatigue of their pilots, repair damaged aircraft and attempt to get replacements for any planes or pilots that have been lost.
The game plays quickly; a one on one dogfight can take as little as 15 minutes, and even a campaign can be completed in a long evening. Components include a play mat, 140 1" square aircraft counters, 140 1/2" square markers, 110 cards and numerous play aids and record sheets.
Eagles in the Sky
This game is currently in development and testing - any images shown here are playtest images only. 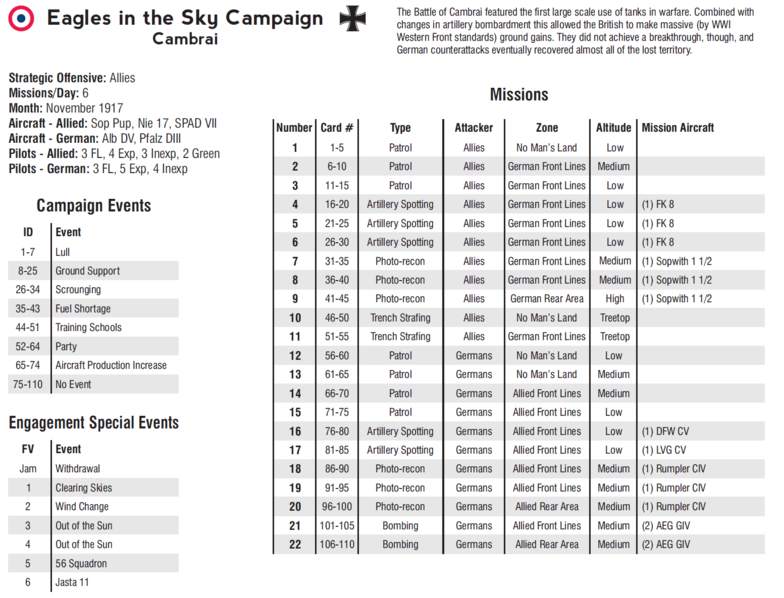