1
Introduction to Washington's Crossing
My name is Roger Miller. I am the game designer of Washington’s Crossing the first game of our Campaigns of the American Revolution series. Since we are new company and this is our first title, I felt it was necessary to introduce the game concepts while actually playing the game. This should hopefully give gamers the information they need to see if our game is for them.
Washington’s Crossing has two scenarios, the quick start campaign, for those who wish to skip the initial Delaware River Crossings by the Americans, and the Campaign Game, of which I will be introducing here. The Campaign Game begins with General Washington preparing to cross the Delaware River to assault the Hessian garrison occupying Trenton, New Jersey. Before I begin, a brief overview of some of the game concepts:
Leaders
The primary maneuver pieces in the game are leaders. There are two leader displays in the game, one for the British Player, and one for the American Player. Troop strengths and fatigue are tracked on the leader display. The number in parenthesis next to Washington’s name below is the maximum number of troops he may have assigned to him, 140.

There are two types of leaders in the game, those who can command other leaders (Commanding Leaders) and those who cannot (Subordinate Leaders).

Leaders are only allowed to move or attack by spending activation points equal to the leaders activation point cost. Activated Commanding Leaders may activate other commanding and subordinate leaders. In this way, multiple leaders are activated by one overall commander. Below is an example of Washington’s maximum command: 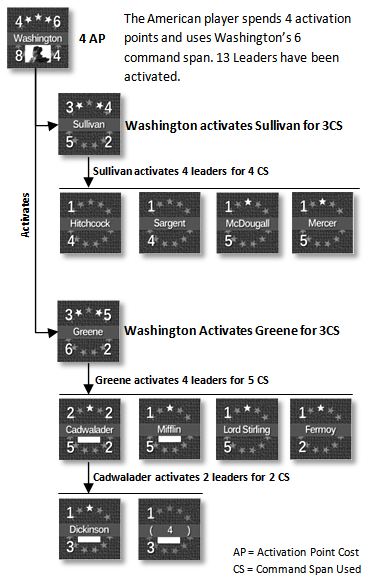 As leaders move and attack their troops become fatigued. Fatigue is tracked on the leader display and ranges from 0 (fully rested) to 6 (extremely exhausted). Fatigue has negative effects on movement and combat.
Movement
Leaders do not have a fixed movement allowance they roll a 10 sided die on the movement matrix chart to determine the number of movement points they have. Notice on the movement matrix chart below that a leaders movement points can range from 0 to 10. The number across the top is the leaders rating. So if a leader has a leader rating of 5, he would use the middle column. Notice that there are several modifiers that affect the die roll. Each time a leader moves, his troops gain 1 fatigue. 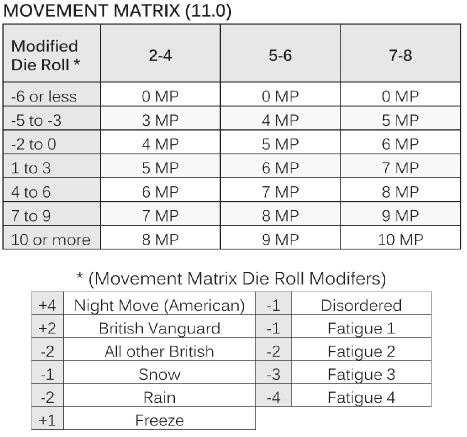