Game Introduction | Game Setup | Turn 1 | Turn 2 | Turn 3 | Turn 4 | Turn 5 | Turn 6
Turn 4: December 26th, 1776 12pm (Day Turn)
Weather - Fair
American Raid - none
Reinforcements - no reinforcements for either side
American Command Phase
The American player spends 1 point to activate Griffin , 3 points to activate Greene who uses his command span to activate, St.Clair, Dickinson and Detachment 5. The American player has 6 activation points remaining.
American Action Phase
St. Clair moves to 2029, Sullivan moves to 2029, Dickinson to 2329, Greene to 2329, Griffin to 2346, detachment 5 to 2130.
British Command Phase
The British player spend 1 point to activate Hessian detachment 1, 1 point to activate Hessian detachment 2, and 2 points to activate von Donop who uses his command span to activate Stirling.
British Action Phase
Hessian detachment 1 moves to 2923, Hessian detachment 2 moves to 2821, von Donop and Stirling move to 2445. Leslie tries to activate by die roll and fails. Rall recovers from rout since he more than 10 movement points from the enemy, he is now disordered.
Commentary:
The American army is waiting for night to rest; only moving those leaders who are lightly fatigued or who were on the wrong side of the river and needed to cross while the weather is good. The one area that is an exception to this is where Griffin joined detachment 4 and detachment 4 started digging entrenchments. These leaders feel threatened by von Donop’s aggressive move.
The British are moving the Hessian detachments north trying to put some distance between themselves and Washington’s main force. Von Donop is trying to attack one of the smaller American forces before it can be reinforced or dig in. Now that Griffin has met up with detachment 4 and begun to dig both sides will need to decide is this the time and place for a battle come next morning.
Situation after turn 4 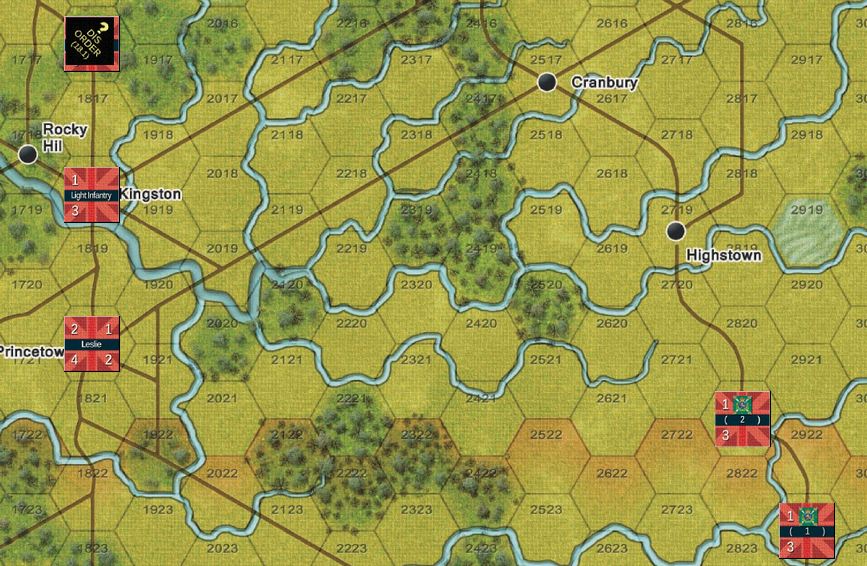 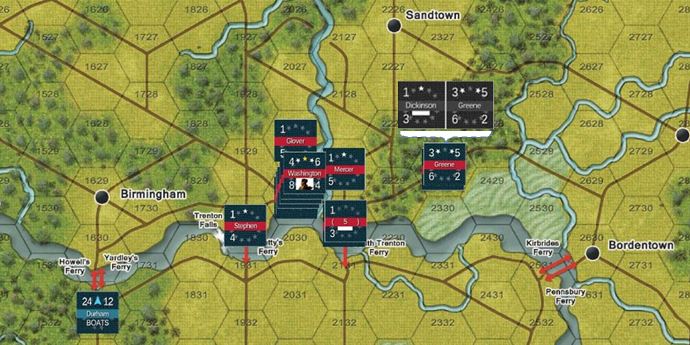 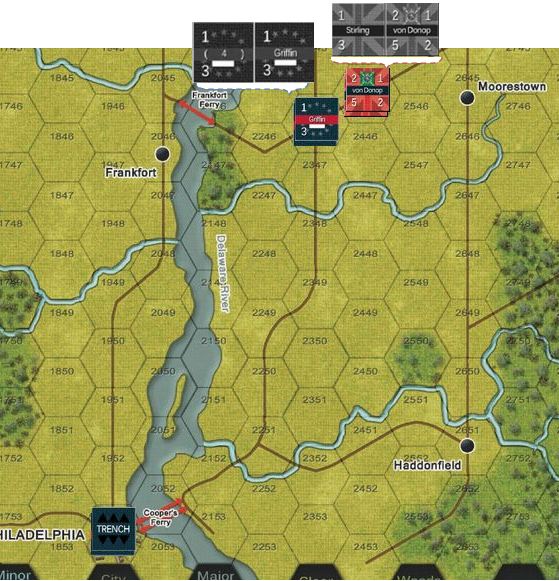