The campaign game setup allows for some variation in the American deployment. The British deployment is fixed. This allows the American player flexibility in planning his initial Delaware River crossings and strategy for attacking the starting British positions.
Game Setup

American setup: Right off, the American player must decide where to place his Durham Boats. He has two choices (marked by the red "X" ); the hexside next to hex 1631 hoping to make his main crossing closer to Trenton, or the historical 1330 which is better for an initial attack on Princetown or Kingston. In this game, the American player places the Durham Boats in hex 1631 to support the crossing at Howell's and Yardley's ferry. 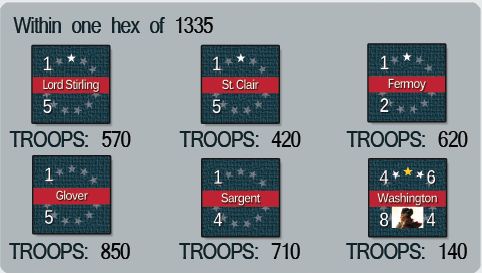 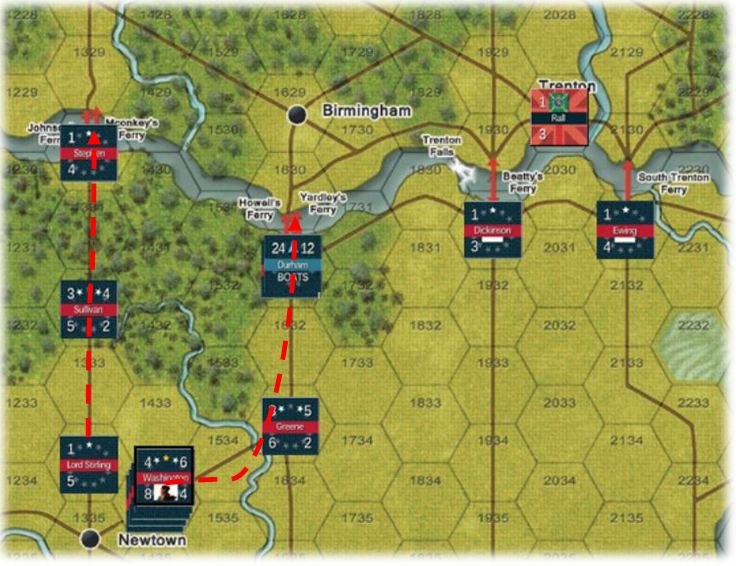 Setting up to cross the Delaware River in several locations is a good plan to reduce the risk of poor river crossing die rolls. Sullivan and Greene (who start anywhere in Pennsylvania) are placed in 1332 and 1633 respectively, which is within Washington's command range and within range of all the American leaders around Newtown including Stephen and Mercer located next to the river in 1330 and 1631. This will allow Washington to activate the entire group which saves activation points and allows all the leaders to move using Washington's Leader Rating.
Initial Strategy
The American player has 3 turns, 2 night and 1 day turn, before the British player moves. This gives the American player the potential to cover quite a bit of distance to setup attacks. The potential targets to attack are; Rall at Trenton, Leslie at Princetown, Light Infantry at Kingston, Hessian Detachment 2 at Bordentown, vonDonop at Mt. Holly, and Hessian Detachment 1 in the marsh near Bordentown.
The American player has the strength to attack multiple locations in the first day turn and should attack Trenton and one or two other locations if possible. The main problems are the weather and its potential to negatively affect crossing the Delaware River. The American plan must remain flexible as it is great to plan to cross the river at Burlington with Cadwalader force and march on Bordentown to attack vonDonop but if the weather is bad and the crossing die roll is poor the plan needs to be adjusted. Historically Cadwalader only got 700 men across and no artillery on the first day and decided to call off his crossing and his part in the Trenton attack. He rested his men and crossed a day later which led to the Princeton campaign when Washington decided to follow up Cadwalader's successful crossing.
Finally if you decide to attack Princetown or Kingston you will cross the orange line across the map which triggers accelerated British reinforcements and you better have a plan to follow up your initial attacks with an aggressive move to the north to take the main British towns or kill a lot of British troops. I do not recommend this strategy for new players but for an experienced player it is a viable option and a lot of fun.
In this game, the American player is planning to attack Trenton with a surrounding attack from Washington's force and to assault Bordentown with Cadwalader's force.
The British player has no initial strategy. He must wait and see where the Americans move and how they attack before he can make a plan. 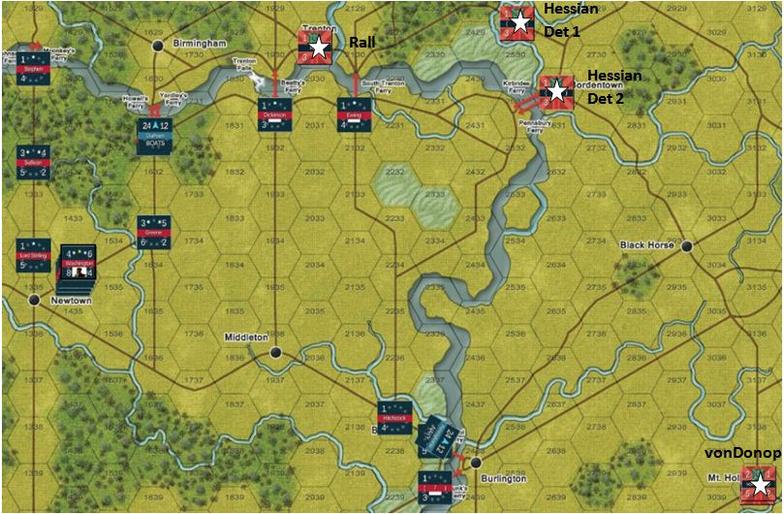