The American player starts by rolling for movement with Stephen who this turn has to roll for movement points using his own leadership value of 4 since he was not activated by another leader. He receives 6 movement points and again tries to cross the Delaware River to hex 1329. This time he rolls a 6 and a maximum of 2,000 troops can cross the ferry. Stephen moves to 1329 having used 4 movement points for the ferry crossing and 1 movement point for hex 1329 and 1 for 1328. 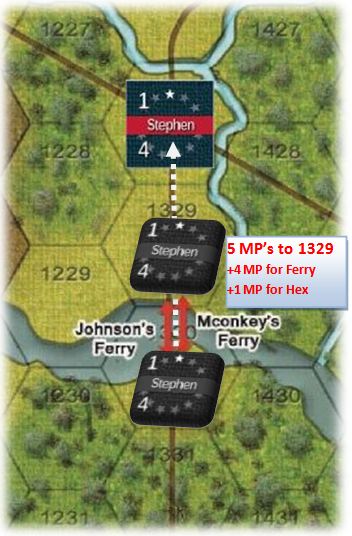 Dickinson now rolls for movement gets 6 movement points and tries to cross the Delaware River to hex 1930. Dickinson rolls a modified 8 on the 1 ferry column for crossing and 1250 troops may cross. Dickinson only has 400 troops so he enters 1930 using 4 movement points for the ferry, 1 for the hex and 1 for the ZOC of Rall in Trenton.
Ewing then rolls for movement and gets 8 movement points and attempts to cross the Delaware River to hex 2130. A modified die roll of 5 says that 500 troops may cross but Ewing has 720 troops in his brigade. The rules require the American player to cross the river with as many troops as possible from the unit attempting the crossing. So Ewing crosses the river with 500 and leaves a detatchment, militia number 5, with 220 troops behind. Ewing ends his movement in 2130 as he is cutting off the retreat of Rall and he wants to remain next to the ferry in the hope of getting the rest of his troops across the river to rejoin him in later turns. The detatchment has also finished moving because when a detatchment is created during movement either the parent unit or the detatchment must cease moving. Ewing continued his move across the river so the detatchment is done moving.
St.Clair, Lord Stirling and Fermoy all roll for movement points at the same time as they are all stacked together and activated by the same leader and receive 9 movement points. Fermoy tries to cross the river to hex 1630 and the modified die roll is a 6, so 1,500 troops can cross and Fermoy has 620 troops. Fermoy continues his move to 1629. (It is a good idea for the American player to check the river crossing with a single leader so if it goes poorly the other leaders have not spent the 4 movement points for a crossing attempt nor fatigued themselves) Lord Stirling with 570 troops then also moves to 1629. St. Clair has 420 troops and so cannot get all of his troops across the ferry since the remaining capacity is 310. He chooses to not move. Mercer rolls for movement and gets 9 movement points and moves to 2129 cutting off another hex of Ralls potential retreat from Trenton.
Cadwalader rolls for movement with his group of leaders and gets 7 movement points. Cadwalader rolls for crossing and gets a result of 1,750 troops allowing him and Hitchcock to cross and move to 2537. Detachment 7 rolls to cross and also succeeds and also moves to 2537. Sullivan always has 13 movement points and moves to 1629 to join up with Washington. Greene remains in place to keep St.Clair in his command span. All of the American units that moved have their fatigue increased by one level. Notice that Washington and St.Clair were both activated but did not move and do not gain fatigue and are eligible for recovery from fatigue. Detatchment 5 was created after Ewing had already spent 4 movement points for the river crossing attempt and it will get a fatigue increase as it has moved.
American Recovery Phase
All American leaders who are fatigued and did not move this turn regain one fatigue level. Washington, St.Clair, Glover, and Sargent all recover 1 fatigue level, all of them back to zero fatigue. Cadwalader, Hitchcock, Detachment 7, Dickinson, Detachment 5, and Ewing are at 1 Fatigue. Mercer, Stephen, Fermoy and Lord Stirling are at Fatigue 2.
British Turn
The British still cannot move in turn 2 so all that happens is they get 8 activation points in their Command Phase as they do every 12am turn, for a total of 8 as they start the game with none, and Rall recovers one level of fatigue in the British Recovery Phase to a level of 1.
Situation at the end of Turn 2 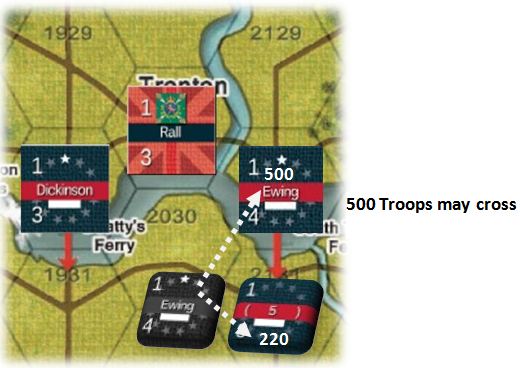