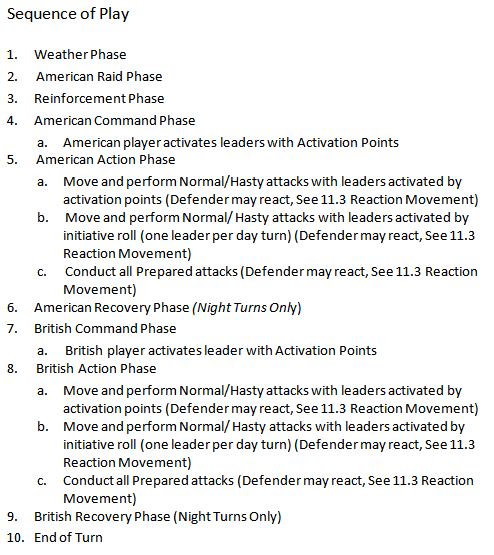 The first thing that happens during each turn is Weather determination. Weather determination in Washington’s Crossing is a two step process. Players first check to see if the previous turns weather continues for this turn. Roll one die and consult the Continuing Weather table.

If the weather does not continue, then players consult the New Weather Table to check what the current turns weather will be.

For the first game turn, the previous turn’s weather is fair, the American player prays this continues in the hopes of an easy crossing of the Delaware River. A die roll of 4 indicates that the previous turns weather would continue if it was Rain, since the previous turn was not Rain, we move on to the New Weather table. A die roll of 2 modified down 1, since it is a night turn, yields a result of Freeze.
American Raid Phase
The American player rolls a 2 on the Raid Table which indicates a raid is possible. The American player now rolls on the Raid Leader Table to see which leader will be conducting the raid and rolls a 7 indicating Stephen’s brigade. Stephen may now choose any British leader within 15 hexes as his target and chooses the Hessian leader Rall in Trenton trying to soften him up before Washington’s attack. A die roll of 0 however causes Stephen to lose 20 men and cause no damage to Rall other than 1 fatigue level since all raids at night increase the targets fatigue level by 1. Rall is now at fatigue level 3. 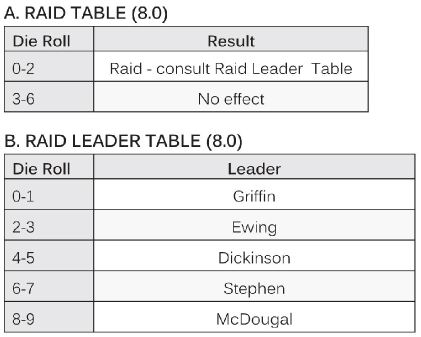 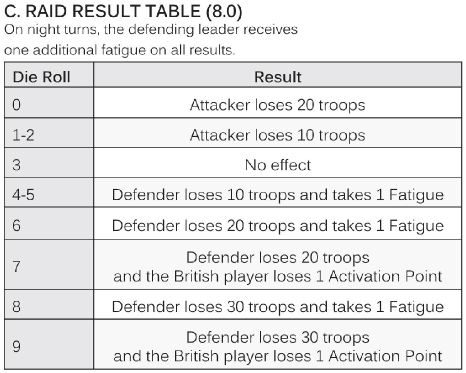 Reinforcement Phase
No reinforcements on game turn one so on to the next phase.
American Command Phase
The American player begins the game with 21 activation points and now decides which of his leaders he will activate with his activation points. He activates Washington for 4 activation points. Washington has a printed command span of 6 now activates Greene and Sullivan in turn use their command span to activate Stephen, Lord Stirling, St. Clair, Mercer, Sargent, Fermoy, and Glover.
American Action Phase
Now the American player will move and attack with his leaders. Since this is a night turn, only movement is allowed. Night is the ideal time for the Americans to move, they receive a +4 modifier to their movement die rolls. The American player starts by moving Stephen. To find out how far Stephen can move, the American player rolls one die and consults the Movement Matrix chart. Since Stephen was activated by Washington, even though the activation was first given to Sullivan and then passed on to Stephen, he will use the 7-8 column representing Washington’s Leader rating. A die roll of 9 is modified up to a 10 (the maximum allowed on the chart) because freeze is a +1 modifier and night is a +4 modifier for the Americans. Stephen receives 10 movement points and decides to try to cross the Delaware River into hex 1329. The attempt costs 4 movement points and a die is rolled on the Delaware River Crossing Table. A roll of 3 modified down 2 for the Freeze and up 1 since it is before the 28th of December yields a result of 2, no troops may cross. Stephen could move elsewhere but decides to end his move and hope for a better crossing die roll next turn. Stephen has his fatigue increased by 1 for moving, to a level of 1.
The American player then decides to move Washington and all of the leaders next to him. Since they are all adjacent he decides to roll once to determine how many movement points all of the leaders will have, except Washington who always moves 13. A die roll of 8 is modified by night and Freeze to a 10 and all of Washington’s brigade commanders have 10mps. Washington and Glover move to 1631, spending 4 movement points, and attempt to cross the Delaware River, another 4 movement points. The river crossing die roll is 5, modified down 2 for Freeze and up 2 for the Durham Boats, up 1 for Washington, up 1 for Glover and up 1 for being before December 28th, yielding a 8 on the 2 Ferry column. This allows 2500 troops to cross this hexside during this Action Phase. Washington and Glover pay 2 more movement points to enter 1630 and 1629. (The American player used Washington and Glover to attempt the crossing because they have positive modifiers )The American player now moves Sargent 10 movement points to 1629. He does not need to check for the river crossing as he knows that 2500 troops may cross this turn and Washington, Glover and Sargent add up to 1700 troops. Lord Stirling, Fermoy, and St.Clair move to 1631 planning to cross next turn. Mercer then determines his movement points and gets a result of 9 movement points. He crosses the river, using up 720 more troops of the remaining 800 available to cross, and moves to 1728. All of the American leaders with troops that just moved gain 1 fatigue level to a level of 1. Greene and Sullivan now move to hex 1630. They have no troops assigned and always move 13 movement points.
Situation after Turn 1 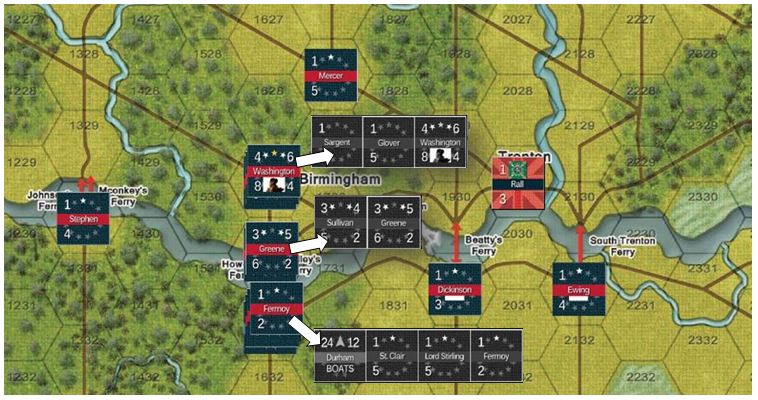 Recovery Phase
Recovery only occurs during night turns, all leaders who did not move or entrench may regain 1 fatigue level. The only American leader who meets this condition is detatchment 4 which has its fatigue level reduced by 1 to zero since it did not move.
British Turn
It would now be the British player turn but he is not allowed to move any of his units yet so his only action is to recover from fatigue. Rall reduces his fatigue by 1, from 3 to 2.
That’s it for this time next time we move on to Turn 2.